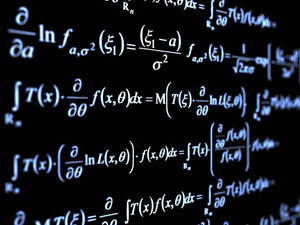 be an open, two-sided surface bounded by a closed non-intersecting curve

as positive if it is on one side of

, and negative if it is on the other side of

. The choice of which side is positive is arbitrary but should be decided upon in advance. Call the direction or sense of

positive if an observer, walking on the boundary of

with his head pointing in the direction of the positive normal, has the surface on his left. Then if

are single-valued, continuous, and have continuous first partial derivatives in a region of space including

In vector form with

, this is simply expressed as

In words this theorem, called Stoke’s theorem, states that the line integral of the tangential component of a vector

taken around a simple closed curve

taken over any surface

as a boundary. Note that if, as a special case

If the equation of a curve C in the plane

, the line integral (14) is evaluated by placing

in the integrand to obtain the definite integral

which is then evaluated in the usual manner.

Similarly if C is given as

and the line integral becomes

If C is given in parametric form

denote the values of

Combination of the above methods may be used in the evaluation.

It is often convenient to express a line integral in vector form as an aid in physical or geometric understanding as well as for brevity of notation. For example, we can express the line integral (15) in the form

. The line integral (14) is a special case of this with

If at each point (x, y, z) we associate a force F acting on an object (i.e. if a force field is defined), then

represents physically the total work done in moving the object along the curve C.

be single-valued functions defined at all points of C. Subdivide C into n parts by choosing n – 1 points on it given by

and suppose that points

are chosen so that they are situated on C between points

The limit of this sum as

in such a way that all quantities

approaches zero, if such limit exists, is called a line integral along C and is denoted by

The limit does exist if P and Q are continuous (or piecewise continuous) at all points of C. The value of the integral depends in general on P, Q, the particular curve C, and on the limits

Other types of line integrals, depending on particular curves, can be defined. For example, if

is called the line integral of

along curve C. Extensions to three (or higher) dimensions are possible.